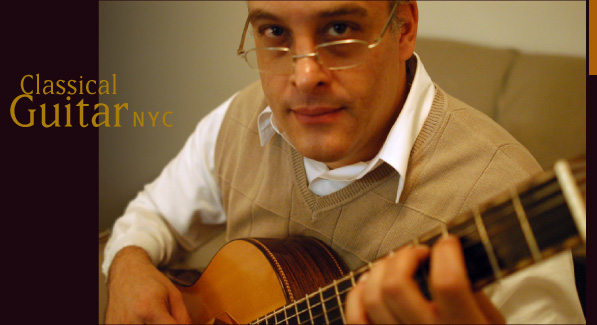 Thomas Furnari has performed at major concert halls in his native New York City and throughout the United States, Europe and Asia. He has been acclaimed as a confident player with a powerful sound, dexterous technique and sophisticated musical interpretation.

A graduate of the Juilliard School, which Tom attended on partial scholarship, he studied double bass with Mr. John Schaeffer, principal bass, New York Philharmonic. While still studying bass at Juilliard, Tom took up the serious study of guitar, a rare feat in that competitive environment.

Tom has been fortunate to work with many of the world’s leading musicians, including Leonard Bernstein, James DePreist, Stanislaw Skrowaczewski, David Alan Miller, Paul Zukofsky and many others.

Tom has had the privilege to be extensively coached by Dr. Richard Jacobowski, who Tom considers his chief guitar influence.

Tom is an adjunct professor at Wagner College in Staten Island, NY. He is also the chief instructor at ClassicalGuitarNYC. Tom performs for many clients annually providing music for politicians, diplomats and Fortune 500 companies.

In addition to his work as a concert guitarist, Tom is regularly engaged in community and educational concerts.

An examination of and devotion to the classical guitar